A regular job, the type 98% have, allows little real latitude. Sure, there are decisions to be made but largely pre-defined. And workers are at work because being there fits with the prescriptions dictated to the boss – his/her/its pre-defines.

Hesheit arrives in the company’s rented park-garage in the company motor early. And not out of enthusiasm but to miss the jam that strikes Main and Voortrekker Roads intersection at precisely 7.04 am and lasts for upwards of an hour. Everyone sees himherit make for the lift at 7.34 - they dash to get in ahead.

Like the army, from the CEO down the day is pretty much set to ensuring goals of making the maximum profit possible out of as many situations as possible without thought of the ultimate consequences to humanity or the earth happen.

The ‘doing’ is called ‘drills’ in the army. In commerce ‘job charter tasks’ – simple enough for workers have been trained their whole lives to do them: Some on the job, some through Best University … left-right-left goes the mind and the body follows. Succeed at one level and move up a step … it is as easy as shooting a rabbit with the aim in time of being the company dude who’s allowed an elephant.

But Beggaring … beggaring is like tackling a wounded buffalo. Beggaring has no schools, no supportive guilds, no lines of credit or phalanx of lawyers and holidays come only when the lights are green.

Beggaring is Real Capitalism. Possibly the only honest example left.

The beggar industry members are there because they have had to create their own jobs.
Beggars scratch their heads to find the best place for their ‘product’, to decide how best to market it and begin self-learning to ‘know-their-customers’ on their patch.

The destitute South African whitie knows to stand straight with a sorrowful look, a properly written explanatory cardboard. To do anything else will evoke cries of ‘don’t demean us you prick, we’re glad if you at least look sad’.

Moses Mandla has more scope, is expected to be silly. He already knows when the dude with his dark reflective glasses has a copy of the latest Big Issue and Laugh-a- Lot prominent on his dashboard to let it pass. He’ll watch for the signal from his wife … there, she’s saying, the brown Toyota looks sympathetic today, careful of the Cortina, it’s angry.

Moses sports a ridiculous painted cardboard hat under which he does a jolly quick-step dance and trip, folk laugh and call him a ‘funny Moses’ and sometimes they do more than laugh – they toss a few coins.

For whitie and darkie alike it is a routine they change as soon as they judge their employers sitting in their cars are tiring.

When that happens, think up a new message, move to a different possie. Or Missus Moses will turn from marketing advisor to busying herself scratching through bins for raw materials. And that night under the city flyovers they’ll make something up and practice, entertaining the others of that branch of the unofficial illegal Beggars Guild.

Maybe if the new routine ‘tweaks-a- spot’ tomorrow when the light is red and she stands head bowed in shame or he dances down the white-line, a window will open, a voice will shout

‘Well-done you! I couldn’t do that, I wouldn’t have the guts. You see I have a job and it tells me what to do when and at the end of the month a cheque arrives automatically.’

And maybe a coin will be tossed.

Be Happy You Had The Sense To Worry

I shared the horrific Welkom park-lot murder[1] onto my personal FB page.  At first I added the view it is time to pack up, that South Africans should consider moving somewhere safer like Gaza, Afghanistan[2] or one of the poorer parts of India[3]. Minutes later I was subject to a tirade. Boiled down, the caller declared I’m unpatriotic.

There is only one way to fix a problem and that is to know it, to expose it.

The forceful President Banda of then newly independent Malawi once explained that when addressing the nation he repeated everything three times: once to wake the citizens, a second time to get their attention and a third time for them to hear there is a problem. Many concerned people/groups have for decades been writing about horror that is the American creation of Saudi Arabia and no one gave a damn until some obscure journalist working for a newspaper got killed. One tiny tipping point.

For South Africa to survive you have to fashion a tipping point. Details of every murder should be posted on every social page until we are all horrified and very angry. Post one new slaughter every 12 minutes.  Stick them in between before-your- mugging selfie, the rugga victory watched before the break-in, the children’s (last to be) birthday pictures and that-was-the-bus-mom-was-butchered-in snaps.

Because South Africans have become so casual they’ve made murder, rape and abuse normal – ‘Oh, another one. Pass the sugar’. The Welkom killers behaved with the nonchalance of workers idling through a normal day-job.

Ramaphosa and crew, and their Big Business side-kicks are useless … to the ordinary citizen. They have, it seems, different goals like pinching paintings or sneaking money out via the system while they launch minor ‘economic initiatives’. Economic analyst Nassim Taleb explained[4] it is no good handing out more expensive pain-killers to defeat diseases that have returned stronger than ever before. The nation will feel better … for a while then … bye-bye.

The huffing about poor productivity while the violence and politically inspired white collar crime, the unpayable foreign debt, malnutrition and collapse of working townships in South Africa continues is beer-hall stuff … get sloshed and talk in circles. The symptoms scream yet the ANC does nothing. Yesterday in Vredenburg said just that[5]. The alternates – the EFF in particular - offer only criticism or participate in the nothing.

To say all’s okay after the indifference of the Welkom slaughter proves the nations has dipped into a state of senselessness that parallels ignoring the green-man light and choosing to dash across Main Road in Sea Point on a rainy night wearing a black tracksuit. You are willing getting killed.

Ignoring common sense rules and repressing our innate humanity is how South Africa got to 56 murders and uncountable rapes and major abuse events[6] every dripping-in-blood day. The government long ago declared ‘don’t worry about the red traffic lights, just do it’. That’s when the dominoes started falling – bigger rules, ethics and morality are suspended, replaced by a philosophy of ‘hide your actions as best you can’, and If you’re caught, find something to blame’ … Zille[7] or a not-too-smart white yapping about beaches are good diversions.

Stop all the childish nonsense about budgets and deficits. How is it that the men and women of the ANC, supposedly the smartest, dressed so beautifully and who live so lavishly, cannot see the idiocy of their continued actions? Stop paying overseas lenders for the privilege of enriching their countries and stop allowing private banks to fleece the government and the people and start creating thousands of jobs every day.

What definitely cannot wait is the declaration of war on poverty. The only way to do it is to introduce national service for all. It is time to remodel and expand the South African army to spearhead the battle through real internal growth. Maximum profit no matter the cost to humanity and the environment must be suspended.

To carry on pretending SA has only a sore toe is the consensus of the super-low IQ. 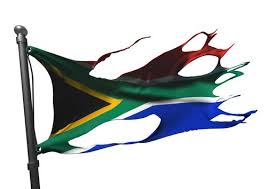 
[1] https://www.youtube.com/watch?v=ffP8Q7oBCgg
[2] Afghanistan: Civilian deaths hit record high, says UN … 1,692 civilians killed in first half of 2018 compared to SA’s 56 per day, 1680 per month. https://www.aljazeera.com/news/2018/07/afghanistan-civilian-deaths-hit-record-high-180715074759987.html
[3] At 5.5 (6x worse than the UK) compared to SA’s 35. http://www.nationmaster.com/country-info/stats/Crime/Murders/Per-100%2C000-people
[4] https://www.youtube.com/watch?v=62rfLjnPxKE
[5] https://ewn.co.za/2018/11/13/38-people-arrested-for-public-violence-in-vredenburg-protests
[6] “99% of all children born in 1990 in the greater Soweto-Johannesburg metropolitan area experienced violence at home, school and in their communities before they turn 18”.  The Daily Maverick article is appropriately headed South Africa is at war with itself. In the Gauteng City-Region “A quarter of all respondents were victims of crime in the past year. That’s an increase from one in five in 2015/16.” Gauteng City-Region. See https://theconversation.com/life-in-south-africas-economic-hub-is-improving-but-big-challenges-remain-106813?
[7] http://www.douglasschorr.com/2017/06/white-white-white-history-repeats-itself.html