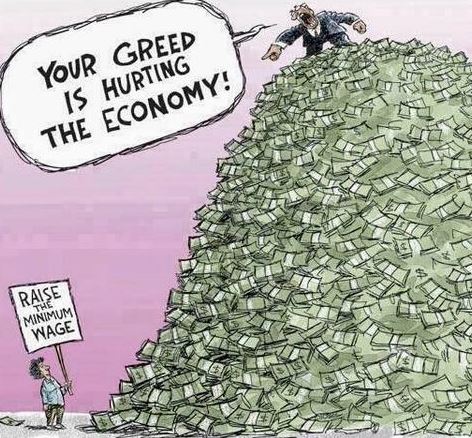 “Cut! Wash his mouth out. No bad talk about our gross fat cats.”

All over the country people have run out of ways to express their frustration at being left behind, and they’re protesting … expressively. While they are being dubbed criminal and savage, Simpiwe (Sim) Kenneth Tshabalala “banked R48.5m pay in 2017 …”[i]

Traditional jokes aside, what can you do with R48 million? Apart from being excessive.
And more excessive - until late last year the Standard Bank had TWO CEOs[ii]: Tshabalala and “older, more experienced counterpart” Ben Kruger earned a “total remuneration of nearly R45 million EACH in 2016 …”[iii]

Our bankers aren’t special (except to share-owners[1])

That South Africa must pay more is nonsense. Thousands of men and women globally could head up a local bank. True they won’t be home-grown so announcing “first black person to lead Africa’s largest lender”[iv] won’t happen again, but true too is that few of our (black or white) bankers would find as easy a job overseas.

The Commonwealth Bank of Australia[v] is likely as big as South Africa’s big four combined. Its CEO’s starting 2018 salary of AUD$2.2 million[vi] was met with complaints, “too much”. True that’s before bonus but still way short of the Standard couple’s AUD$9.7 m (ex/rate on 13 May 2018) for a quarter job.

Bankers aren’t productive engineers making today real or scientists designing tomorrow nor do they need the strategising ability of a police officer negotiating a gang outburst in one of South Africa’s hundreds of poor-spots. A banker’s job is internationally directive driven and locally there’s a manual and procedures … like driving a car. And while the professional staff drive the CEOs “network” at Davos gatherings, in the board-rooms, at conventions, at cocktail-does, on the golf course. They don’t make anything … not even money.

They exploit what they call “discontinuities”[vii], a fine word which means they ensure there is always an unbridgeable gap between what workers’ wages can buy and what they totally need to buy. The only way to fill it is to get some sort of loan.

Bankers pump customers to get into, from a share-owners view, the wonderful concept of profitable debt. But it is one issue to find a pot of gold when blessed with a BA, LLB , LLM, HDip Tax, AMP[viii] qualification at your back and another to be one of the majority who can read and write but don’t fully understand who suddenly find they’ve money too - by signing “there, there and at the bottom here”. Then they're reminded to pay back monthly.

In society going into debt for basic requirements has as its by-products stress, anxiety and financial failure leading to maladies that spread like measles – from family break-ups to municipalities missing Eskom payments. Gangrenous to the nation, but when customers cannot meet their debt obligations (and right now many South Africans are battling[ix]) property (for example) gets attached, put back into the market for another sale. Being private the banks take their winnings home.

Because it is an unproductive process private banking is inflation’s spearhead[x] - for good banking reason: higher prices mean bigger loans and as banks work to percentages they make more and the borrower gets less value.

Obesity and its opposite, skinniness, is a major problem in South Africa. For the majority the cause is eating wrong. A majority of that majority haven’t the money to buy right![xi] Imagine being in a situation where your food bill is a major item in your budget.

Others just eat-drink too much, display an attitude of “see me, I can afford it”. Likewise the overpaid: merely by accepting the unwarranted millions for having fun they acknowledge they have lost sight of the role and value of money in society. Often they’re unable to function as a normal discriminating consumer. While ordinary folk check the cabbage they’re selecting for supper for freshness the super-rich vie to buy trophies to lock away[xii].

Isn’t it time to question the Greed system running the country?

That adjustment came when the average income for Black households stagnated at somewhere around R70,000 p.a.[xv] 714 black families then make one Tshabalala now.

“Parity” refers to what other SA banks are paying, not government. With Kruger becoming a director Tshabalala needed another. Lungisa Fuzile came from a (circa) R2 million a year government job, swapping a job supported by taxpayers for one funded by customers. What will they pay him?
Absa’s big five got a total of R123 million for the year (2017), the Nedbank CEO earned R38.1 million (BusinessTech, April 4).

… or does it comes with a wink and a nod?” asked Australian journalist David Taylor.

"The criteria are usually very complex formulae, and have been provided by highly paid salary consultants the board hires," answered Professor Clarke[xvi]. “But the strange thing is that always these complex formulae work in the favour of the recipient and indeed in the favour of the consultancy, which is on a percentage of what the executive receives for providing the advice.”[xvii]

In November 2016 the magazine Asian Banker acknowledged the more they get from customers the more Malaysian and Australian bankers are paid. The article then listed the “Top Gamblers”[xviii]. An appropriate title.

Pushing up earnings per share is one thing but seldom are those head-gamblers held accountable: Does a month ever pass without something damaging reported about South African banks? Eventually there’s a fine or a junior blamed.

The scope to damage society is now unlimited: banks are into stockbroking, inter-bank betting via derivatives and futures/options and so on. It is not the banking needed to lift a country struggling with productivity[xix].

Helping save the world from communism I patrolled the Zambezi in the 1970s. My only fear - being gobbled by a crocodile.

Far from being communist agents the badly trained, ineffectual kids opposing me were simply tired of pleading, not for equality but for a half-decent crack at life - a 10 kg store of mealie-meal for Mom to cook at least. Very little has changed - Different kids.

When Obama declared “We’re fortunate to be living in the most peaceful, most prosperous, most progressive era in human history”[xx] he had to be referring the top 15%. Even so I’m petrified of waking tied up, looking into the eyes of a poor and angry South African about to routinely practice murder on me while he looks about for cash for food and a phone.

Capitalism’s the only way

But it depends on the brand applied.

The “leave-enough-profit-for-the-next-guy” of my youth disappeared with my youth. Dead soon too is the Globalisation – Free Trade ideology[xxi]. It benefited only the rich countries[xxii]. The rich extended it through Structural Adjustment Programmes but emerging nations are reaching the limit of their debt-holding capacity. The replacement process I call Greed (American Style) Capitalism.

It kicks in when the owners and their managers turn from exploiting weaker nations to feed on their own citizens. Baby sharks do it – the most vicious eat their slower siblings. Greed Capitalism embraces the services of private banks and through the dependence that unpayable debt brings it sucks the life-blood from its citizen base.

The Greed Capitalism brand won’t die off as quick: Right now the system is into the most lucrative sector of all. The “South African middle class is (increasingly) unable to meet its debt obligations on time”.[xxiii] Sometimes Hollywood produces horrifying prediction films. Re-watch Hunger Games I with my comments in mind.

The most unequal country in the world[xxiv]

South Africa is dysfunctional, far from the happy whistler Rainbow Nation Mandela desired. Poverty is the problem but the World Bank’s contention that it is the “enduring legacy of apartheid” is a distortion.

It can no longer be claimed that the majority are so disadvantaged because of history alone. The new generation of fat-cat executives have chosen group enrichment. They suffer from a poverty of will to build the country and their blindness is driven by obese private banks’ adherence to Greed Capitalism’s manual. The ANC has allowed it to be that way for the last 24 years.[xxv]  Its billionaire president proves profitability.

For the few, there is the BanKquet. Expensive sadza for the rest.

[1] The shareholder is extinct. Nowadays buyers of shares own shares only as long as they are getting the best possible return.


[i] Fin24 headline 4/5/18
[ii] https://www.biznews.com/briefs/2017/09/12/ben-kruger-standard-bank-ceo/
[iii] Renee Bonorchis and second-up, https://www.moneyweb.co.za/news/.../standard-bank-ceos ... 24/4/ 2017
[iv] Renee Bonorchis on Tshabalala
[v] Ranked by Forbes in 2017 as the 22nd largest bank in the world
[vi] www.abc.net.au/news/2018-01-29 Standard Bank (RSA’s biggest) fits in the irrelevant bank range of 140-150 biggest, roughly one ¼ the size
[vii] Macrowikinomics
[viii] Mr Tshabalala’s qualifications
[ix] https://www.fin24.com/.../vehicle-loan-defaults-hit-highest-level-yet-index-shows-201...
[x] When I was a kid banking was the only anomaly in Capitalist’s produce-produce system. Now we have mergers, share-buybacks … and more.
[xi] http://www.douglasschorr.com/2015/01/the-beautiful-people.html
[xii] https://www.fin24.com/Economy/super-rich-hunt-for-trophies-leads-to-r38bn-in-sales-20180520-2
[xiii] https://businesstech.co.za/news/banking/121579/banking-salaries-in-south-africa-ceos-get-massive-pay
[xiv] https://businesstech.co.za/news/banking/241651/standard-bank-ceo-scores-r48-million-payday/
[xv] http://www.pewresearch.org/fact-tank/2013/12/06/chart-of-the-week-how-south-africa-changed-and-didnt-over-mandelas-lifetime/
[xvi] University of Technology in Sydney … corporate governance expert
[xvii] http://www.abc.net.au/news/2017-08-08/why-do-australian-banking-executives-get-paid-so-much/8785534
[xviii] http://www.theasianbanker.com/updates-and-articles/ceo-remuneration-2016:-piyush-gupta-of-dbs-is-highest-paid-executive-in-apac … meanwhile over in China “The total pay of Jiang Jianqing, former chairman of Industrial and Commercial Bank of China, was slashed in half to around $84,000”.
[xix] SA in bottom ten for global competitiveness … Fin24 headline May 2018
[xx] Quoted by Michael Shermer
[xxi] The collapse of Globalism by JR Saul
[xxii] How Rich countries got rich … by Reinert
[xxiii] Stephen Davies writing for The Journalist.
[xxiv] Headline @ https://www.independent.co.uk
[xxv] http://www.douglasschorr.com/2018/02/the-runt-can-ramaphosa-rebrand_19.html