Banks are killing us but they don't have too, Part I: Money moves 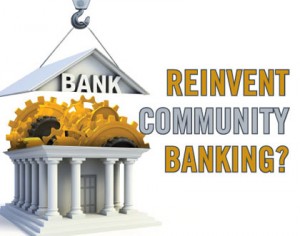 60 years ago I proudly, and carefully, carried a share of my Mom’s fresh-baked bread pudding to our neighbour Mrs. Goldsworthy. She was delighted.

True, but so was Mrs. G. When Mom realised she was out of sugar and the shops were closed Mrs. G provided. Her sugar was returned puddin’ised.

She arrived in the village. She booked the room of the guest house with a cash deposit of (South African Rand) R10. And saying to owner Gus, “If business is good I’ll stay over,” she strode down Main-and-Only Street.

Clutching the note Gus ran to Bert-Butcher. “Steak for me tonight!”

Order wrapped Bert-Butcher snatched the R10 and rushed to Green the grocer. ‘Here’s the money I owe for the month’s vegetables’ he cried delightedly.

“Give me that,” shouted Ben Baker and grabbing the tenner he dashed to Ma the beer brewer.

She wrote a receipt. “You can drink again Ben, but now I must pay my son’s teacher with this R10.”

“Which I owe to Gus Guest House” cried the teacher.

‘Thank you” said Gus accepting the “money” … just as the saleslady reappeared.

Gus, the teacher, Ma, Green the grocer, Ben Baker and Bert-Butcher watched her drive away.

Now, isn’t that the way money should be used in South Africa?

What if Ms Saleslady was named Ms Government, or Ms Community Bank?

Add a further dimension. Pretend Ms Government did stay over, and added R40 more for a night’s dinner, bed and breakfast.

Introducing R50 from outside, putting it into that tiny community would have made it sing. At the very least Gus have to engage a cook, a waiter, and a maid will be needed to strip the bed in the morning.

Give an idle group a ball and they’ve an everlasting game – same principle.

When Community Banks/government have the money-ball – then we play economy.

For thousands of years “economy” described

The mutually beneficial relationships enjoyed by people with people.

It was all about co-operating, enabling one another and trading fairly, helping rather than hindering, understanding where we fit in society and being sociable without being a doormat or a bully.

When things got complicated as populations grew and we weren’t all farmers any more we needed a medium to facilitate exchange. We called it money.

Perhaps “contract agreement paper/coin” would have been better because it simply confirms one party’s duty to do something to get something back from another. Over the last few hundred years through the banks they started, the elite cornered the supply of money and they deal it out and reel it in as they alone see fit.

Their control is so great that far from facilitating exchange and being freely used to develop communities, money is considered something real, something magical[1] - a power - to be accumulated and hidden away in banks.

On computers in (once secret) havens lie trillions,[ii] with the result the value paid for work has stagnated, fewer people have life sustaining jobs, the cost of living soared and debt is everywhere.

It’s 2018 and less money circulates through the working majority (the 85%) than ever before. To be without money is to be without air and water.

Years ago my car stopped outside Butterworth (Gcuwa) in the Eastern Cape, South Africa. I went for help - it was stolen. A local, Japie, rescued me and I stayed the weekend.

While showing me his brick business a young fellow reminded Japie who he was, why he could be trusted and asked for a loan. “R100 for 2 weeks, usual terms.”

Japie counted out R100. Masuku thanked him, handed back 10 and the rest he gave to his wife.

But Musuku explained there was no work, and those with temporary jobs had no security so, in this modern world we have built, they could only get carry-over money from the few like Japie who were prepared to take the risk.

“A poor black man could become either a perpetrator or a victim of homicide during the search of food. They take risks every day to procure a meal.”[iii]

“I fund 20 guys regularly on trust. I cannot handle more” said Japie. “But in the city an Induna[iv]runs a “family book”.

Those he knows have a 95 for 100 deal. The rest negotiate. He has simple rules: Borrowers have to be supported by family and they in turn have to identify as being members of a local community. Discussion then centers on the productivity of the loan, the reasonableness of the amount and of the length of time to repay.

It is that simple

We used to have post offices nearly everywhere. Where they weren’t, the local administration messenger-network system was. They knew EVERYONE. No one needs to be excluded.

And there is always as much money as is required: The saleslady advancing R10 into that mini economy proved that. It is up to government. The government is as chosen by the people.

[1]If our wonderful lady had said to Guest House Gus, “Dang I’ve left my purse in the car. Please pretend I have paid a R10 deposit”.
And Gus agreed and ran to Bert-Butcher … and so on … other than each businessperson having to explain the position to the next, would there have been any difference?  A trusted word replaced the ten Rand. That’s where the community bank sponsored by government should be.