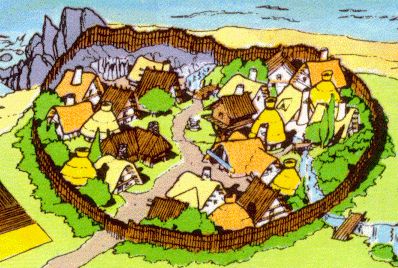 Every South African (SA) community could have a clinic staffed by senior nurses, radiologists and family-health counsellors assisted by patrolling health professionals.

They’d attend to neglects of the past – importantly malnutrition[1]. But mostly, with an eye on the future, they’d be into preventive interventions. And they’d be busy with all those injuries endemic to happy, active societies … sports-ankles, fell-out-of-tree wrists and braai-burns.

That would be a big change to overloading hospitals and police stations with rape, mugging and gang violence victims!

Remember the government would’ve ensured a buzzing economy through employment[2].

Why not a community owned (profitable) locally managed transport service to get there?

And retirement villages behind the clinic - great. They’d be close to the community extramural centre. It would be an easy walk from the Link-to-the-world IT hang-out which would be adjacent to the small business development counsellors’ offices, and, of course, an Our Bank outlet[4]. ABSA and Standard can set-up too and try compete!

Nor is there any PRACTICAL reason stopping us

More jobs, more money circulates. People not only look after provided-contributed for facilities of acceptable quality[1], they reinvest in themselves and so

a)      Everyone saves as the frequency of riots and strikes demanding rights and ministerial fights over kick-backs[5] and sports quotas[6] diminish, and
b)      the stronger the economy the more tax is collected.

The American Society of Civil Engineers rate America's overall infrastructure a grade of D+ … things are seriously run-down[9].  The USA has money - Quantitate Easing saw billions upon billions created but instead of the money stimulating the economy politicians chose to support those that support their election campaigns – the private banks[10]. Meanwhile “the Chinese have managed to fund massive infrastructure projects all across their country”[11].

Do the Chinese understand Modern Money Theory (MMT) better? It seems so. But it isn’t modern.

As a government bank The Commonwealth Bank of Australia (founded 1911) was so successful through the First World War and after that Big Business got the politicians to hand it over.

“There's nothing to prevent the federal government from creating as much money as it wants and paying it to somebody” … Alan Greenspan – Chairman of the Federal Reserve of the USA for 20 years[13].

Although the ANC has run up unpayable debts[14] with overseas loan sharks it still has copyright on the Rand. Although the SA economy would be one mouthful for any of a dozen corporates it nevertheless has the same sovereign rights as the USA and, in theory and by duty certainly, the Reserve Bank can create as much money as it wants, and pay it out.

The annual fashion-and-champagne-bash to set a ‘realistic budget deficit’ is not just wasteful, it is deceit.

Simply ask of the smallest communities and on up to central government what must be done?

Once what-MUST-be-done is validated it must happen.

“The question is how do you set up a system which assures that the real assets are created which those benefits are employed to purchase?”

As long as all created money is used productively, even with full employment, it’ll be ‘difficult’ for national-to-community spending to fail or produce unmanageable inflation. The reverse is the bigger truth.

Wasteful expenditure because of (for example) bad roads or polluted water sees money fail, inflation rise. And failure of that sort suits the maximisation of profits as do “integrated” companies that share in banks, and sell sugar-alcohol-cigs and provide gyms and hospitals.

They’re White Elephants seldom reported on, and here’s another shocker.

“1,382 personnel employed by the (Ramaphosa) Presidential Protection Unit, protect a total of 17 people”[17]. That’s okay? Residents of so many poor areas and many farmers only see a policeman when they’re dead.

It’s illogical to determine what a country can and can’t do according to budgets based on money borrowed (like Greece) from ‘stronger’ currency lenders to be re-paid by local taxation.

Secondly, in the beginning there had first to be government-controlled money creation and government expenditure. Then only people earned taxable incomes. Tax should have nothing whatever to do with ‘fixing’ the country.

Money is merely a contract of exchange: It has no value until government or business or the wage earner does something with it. It gains value if it is used – say - by a local government to build an irrigation dam or by a person buying corn, roasting it and from the bus-stop, selling it to passengers.

Money allocated to projects devalues when used instead to –say- get fat on fast foods or to take the family for a holiday. That’s fine when it’s one’s own money.

Nations are not Households

An average South African’s daily spend limit is around (Rand) R400. In a Tshabalala-type home it could be one hundred thousand. The limit is set by one’s in-coming-cash.

Sovereign governments (countries that have their own currency[18]) are not restricted to net income[19].

A nation cannot run out of money

When a president says “the piggy bank is empty that is just not true”.

It is a statement of political convenience explains Professor Wray of the USA[20].

It is also the behaviour of a vassal state which is how SA behaves: Months ago he sent out ambassadors to look for cash and now Ramaphosa has himself been to Saudi Arabia to get a loan,  conveniently reported as “investment”. The Arabs didn’t get rich being nice[21].

SA should never have to sell off its air, water, land, electricity, broad-band and so on because it is told (by Corporate owned rating agencies, IMF and WB and/or foraging private banks) it has run out of money.

They’re great words to the private sector: “No money! Shame – sell it to us.”

The political elite appear to lack practical skills. But they aren’t short on talking to hand problems over: Recently, for example, Minister Dlamini declared, “On the first of August, we are going to observe or have a day of mourning”[23]. Will that fix violence against women?

Is it fair to say South Africa is behaving like a lad who has been given pocket money for the first time and is looking for the next ice-cream instead of planning for three meals a day for ever?

“Now that you know the right answers what do you say now?” asked Hedgefund founder/academic Mosler of his MMT students.

I say we can fund our own proper clinics, schools, IT hubs, roads and full employment with our Rand.

[1] Don’t provide a half-baked school with half of everything and expect people to feel grateful. That’s about the same as saying ‘oh these jeans are finished. I’ll give them to charity’.
[1] http://www.douglasschorr.com/2015/01/the-beautiful-people.html
[2] http://www.douglasschorr.com/2018/07/sas-government-responsible-for_15.html
[3] See Winning Communities
[4] http://www.douglasschorr.com/2018/06/south-africa-time-for-our-bank.html
[5] No need to look any further than the situation last year in North West province
[6] In Australian JUNIOR schools winners’ medals are awarded to all who arrived to play.
[7] https://businesstech.co.za As regards wider aspects of “accounting” https://www.taxjustice.net/2018/07/24/a-firewall-to-protect-eu-citizens-from-the-big-four-accountancy-firms-and-the-tax-avoidance-lobby
[8] https://www.financierworldwide.com/infrastructure-funding-in-germany
[9] https://www.cnbc.com/.../engineers-give-americas-infrastructure-a-near-failing-grade
[10] Hudson: save the banks or the economy? Obama: the banks … https://www.youtube.com/watch?v=Og34eyAHCQ4
[11] https://ellenbrown.com/2017/05/17/if-china-can-fund-infrastructure-with-its-own-credit-so-can-we
[12] Explained @ http://neweconomicperspectives.org/2014/06/modern-money-theory-basics.html
[13] Then Chairman of the USA Federal Reserve quoted by Professor Stephanie Kelton @ https://www.youtube.com/watch?v=XCmwDT565m8
[14] http://www.douglasschorr.com/2017/05/zumas-not-junk-hes-just-lost-our-marbles.html
[15] The PIC row develops … https://www.fin24.com/Companies/Financial-Services/pic-duos-shady-payouts
[16] Zuma’s lost our marbles
[17] DA FB post copied 14.7.2018
[18] And authorised public/community banks
[19] “Sovereign governments have a very flexible policy space that is unconstrained by hard financial limits” wrote Levy Institute supporting Greenspan’s comment as do, among so many others, Professors Keen (DebtWatch), Kelton (previously Chief Economist on the U.S. Senate Budget Committee), Hudson (The Hudson Report), Wray (Missouri–Kansas City), and so too academic/hedge fund founder Mosler, Public Banking Institute’s Walt McRee and Advocate Ellen Brown of the Web of Debt.
[20] https://www.youtube.com/watch?v=yofpo88ipmo
[21] Their wealth supports the expansion of terrorism https://www.huffingtonpost.com/.../the-real-largest-state-sponsor-of-terrorism
[22] The latest (@ 14 July) https://www.dailymaverick.co.za/article/2018-07-10-ace-magashule-and-new-free-state-premiers-families-score-cars-contracts-in-r300m-government-programme, and see https://www.dw.com/en/south-africa-the-rise-and-fall-of-the-anc/a-42603926, and Auditor-general laments lack of accountability as he releases ... www.agsa.co.za/.../Reports/ ... May 23, 2018, read any reports from groundup.org.za and, last example,  https://www.msn.com/en-za/money/financenewsitaly/fedusa-calls-on-pic-to-have-2-directors-declared-delinquent
[23] https://www.msn.com/en-za/news/other/govt-unveils-plans-to-curb-violence-against-women