Last Saturday, on the grass of the Brisbane City rugby stadium, the Wallabies deservedly beat the Springboks.

The spectacle was beamed to hundreds of thousands. There in the crowd among the cheers and tears was the HSBC Bank logo. On the field giant HSBC lettering gloved the four poles, protecting the players from a knock against the noggin if play went there.

‘Ironic, funny, sad,’ I thought. ‘Bloody pissed off!’ I muttered.

With all the flaws of modern professional sport rugby is still a game of teamsmanship, supreme athleticism and courage. For me it’s 80 minutes of entertainment full of assaults on the impossible as the game evolves, and as my body remembers my own playing days and jumps for joy.

HSBC should not be a part of good, clean fun. They’re bloody drug dealers, are they not? They’re bloody price fixers, tax evaders, scammers, they’re been busted doing business with the dirtiest and darkest of human beings this world has to offer.

I immediately wrote a blog to that effect. My theme was word association – the game we played in high school to develop our vocab. I started with drugs. It went like this: Drugs - forced prostitution - human trafficking – guns – gangsters – death – pain – drugs - HSBC.

My editor threw up his hands in horror. ‘You have to explain why!’ he shouted and taking all my notes returned a 12 page missile on the dirty, devious and dangerous history of HSBC.

‘Did you know that 150 years ago the bank was the chief financier of the opium industry that was to cause untold horror and misery among the Chinese?’ Read the document. ‘Did you know that the company began out of the ashes of the second opium war? Did you know that in 2012 HSBC was proven to have laundered billions of dollars for Mexico’s Sinaloa Cartel, an organisation responsible for over half the exports of marijuana, cocaine, heroin and methamphetamine to America every year? Did you know that the bank was only fined five weeks’ profit (normal business cost?) and told to get on their way? Did you know that the slap on the wrist is a brutal indictment of the War On Drugs system, proof that the West’s top governments cannot afford to stop an industry worth $500 Billion annually, one that siphons money from the poor and feeds it back to the rich of all strata of society via institutions like HSBC? Did you know that the bank has been implicated in several other scandals - large scale tax evasion, insider trading, the sub-prime housing scandal of 2010, and that its management have yet to be served any kind of sentence while a former chairman became a member of Britain’s parliament?’

‘Crap,’ I muttered, mashing the delete key to invisibilize all the old info. ‘Of course I know that. Of course people must know what HSBC is all about, they must be as angry as me that rugby has aligned itself with scum. How could they not?’

I sent a stinging mail back.

But I couldn’t sleep that night. I knew he was right. The frenzy of Facebook anti-elephant poaching warriors and the runaway success of the ‘Taken’ franchise (over $1 Billion earned worldwide on the premise of a grandpa taking on the might of the world’s pimps while the world’s pimps gobble popcorn in the audience, and while young women are abused against their will the next building over) proves it.

People aren’t interested once the issue is removed from the personal level. They prefer causes that require no change to their ordered lives. They don’t want to know about the bigger picture if a long-term solution means short term sacrifice - climate change is just too far away so take the 4x4 anyway.

If the kid next door commits suicide over drugs or the in-laws’ baby daughter goes missing at the shopping mall and is raped and prostituted, they’ll get riled up for a while and then go back to ignoring it.

With no reply from my editor the next day (I suspect he’s ignoring me), I took the decision to take the mission into my own hands.

‘What do you think of HSBC?’ I asked all and sundry.

‘Service is good,’ I heard.

‘Banker to the underworld,’ said only one.

‘Hmm … There is the drug thing,’ said my doctor as I had my chest checked. ‘Where medicine makes billions of dollars out of rehabilitation clinics, HSBC makes even more by protecting the drug lords and by laundering their money.’

Reality is stark and farcical. Two months ago Australia got hugely excited about Indonesia executing a couple of drug dealers. They're quite happy, however, for the 3rd biggest bank in all of Europe openly convicted of assisting a horror industry that affects not two but hundreds of millions, to advertise at their biggest sports events.

HSBC’s top players and shareholders, the ones who settle their backsides into the comfy chairs in society’s top clubs and palaces, are the savages who cement the bond between ruthless greed and capitalism. And it is the politicians that unbridle the restrictions, making all manner of savagery possible.

Because underneath it all, we know it, we feel it inside ourselves, the paper trail doesn’t stop with HSBC. Rather its invisible footfalls echo up the hallowed halls of power via 10 Downing Street and the Whitehouse all the way to the Federal Reserve. And further, sideways to the boardrooms of nations’ top teams who nod and accept the HSBC jersey, knowing they read what they read, knowing what HSBC is and what they do. And downwards, to me and you, who continue to bank with those bastards.

Do you bank with HSBC? Does it matter? Judging from public reaction to the acceptability of HSBC supporting our rugby, I’d say we simply couldn’t care - just don’t involve my family or the elephants.

The All Blacks face the Springboks at Ellis Park this Saturday. It seems life, and the game, marches on.

PS. To get the full story, read any of these articles: 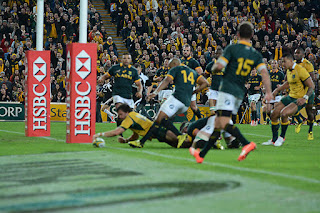