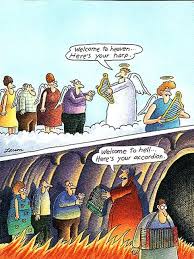 Gary Larson ... in the mists of the mind

“One thing is very clear in my mind this morning is that the good Lord desires justice” ... 22 August, David Coltart of the Movement for Democratic Change (MDC) [i].

Based on the deluge of pre-election Face Book posts many MDC supporters followed the ex-senator in believing prayers would win. Instead some overzealous MDC folk are in prison and its leadership is promoting defiance … probably because they have a hint of USA support.

To win when the guys to beat have a near monopoly of support of local media, army and neighbours and, importantly, the last wisps of the indomitable spirit of the Black Nationalism that knocked Smith out, you actually have to do some work.

The world was 4.543 billion years old before the few dozen species that were our ancestors began pointing to caves in the African kopjes and telling the kids to be good because gods’ are watching.

Now 7 billion imagine hundreds of thousands of gods by billions of labels[ii]. Christianity alone has over 33,000 cherry-picking denominations[iii], most formed to distance themselves from its violent past. As gods exist because of followers making prayer requests is a psychological minefield[iv] as half of all religious rugby players know within 80 minutes.

A few hundred thousand years ago a handful of ancestors trekked north, populated the world. They did amazing things though too often in the name of violent men-first-gods while back home, those who stayed split into reasonably peaceful groups and finally learned to build huts, to tend the stock and grain that came south before the Sahara closed over.

The Zimbabwe Shona weren’t settled long when the Islamists from the north and the Christians of the west used their territory as a slave-for-money exchange point. When black-gold lost international favour the bloodiest slaughter of animals the world has experienced began. The devout (mostly of the Queen’s Anglican outfit) supplied the thousands of Billiard Halls which opened in the USA in the late 1800s … 3 balls to a good sized tusk. The gods didn’t replenish stocks but allowed evidence of mining to bring Imperialists, and with Bibles and machine-guns their prayers of new opportunity was realised. In the 1920s the snatched land was passed on to Moffat (son of the great missionary) and then Huggins took over.

Gods made powerful by internationally supported legislation were good to their white-only Christians of-many-types with the maximisation of profits. Success came because they prayed for that which was guaranteed … mainly that the natives recognised – through the church system - they were third-class.

But then the world changed requiring a re-write of the prayer-checklist. It demanded the inclusion of “share-some of the bounty” but the Smith-Rhodesians rejected a definite-gods-given 1961 Constitution.

Understanding positive-prayers the (mostly) Ancestor-Christian cross-over folk of Zimbabwe WORKED to ensure their prayers were answered by increasing the numbers proficient at fighting. Daily for 15 destructive years each side had prayers answered, prayers ignored.

Finally the gods (concealed as Big-Business) noticed the majority of those praying didn’t just kneel about but had organised themselves into a reasonably coordinated and unified group. When the prayers were counted a landslide that made adjusting the ballot impossible all the gods had to do was ensure the power-brokers, Thatcher and Reagan, heard. Zanu-Pf was in.

Prayers work when the prayers load the dice. Success happens to families/communities who complete pre-prayer checklists.

The drop in infant mortality in Southern Africa is miraculous[v] … because prospective parents and communities and the professionals work to make sure the best possible conditions are in place before hand. Prayers can happen when all tasks are completed. The professionals are mostly science-sorted[vi] and get on with ticking-off the checklist and doing the job.

Study for examinations, get that job and act to keep it. Only invoke gods’ help to fix your marriage or keep cancer (and etc.) at bay when a serious hole in that checklist of actions has been kicked. Build to grad-a-star but know if you miss you provided for a lower learner planet. And give thanks to gods that you had the foresight to ask the gods to tell you to do that.

They have. The MDC with leader Nelson Chamisa doesn’t deserve to be supported because Nelson is nice! Others say the women of Zim were lucky the arrogant man’s out[viii].

How could the gods support the MDC when by their own admission they had excelled at in-fighting, hadn’t done enough voter education and promised trains-in-the-sky instead of honesty[ix]?

That Mnangagwa was allowed to pull 204,710[x] votes in Harare shouts that the MDC were in disarray[xi] but, when you’re losing maybe the way is to find another TMO referee.

Praying is a cop-out …

… unless a mega-god wants your mineral, agricultural potential and strategic position.

Has Coltart changed gods? Given that it is widely said (and perception counts) the MDC was a US creation in the first place his recent tweet of Michelle Gavin’s article

(sort-of) reaffirms more of the same.

Beware Zimbabwe: Gavin is a senior fellow at the Council on Foreign Relations[xii]. It is run by a true god - The Rockefeller Foundation[xiii]. Recall Henry Kissinger; the man who played such a huge role in getting Mugabe recognised in the 1970s? He was the lead man for the same One-World-One-Corporate-run-government visionary, Rockefeller’s CFR.

Having the latent support of the world’s most destructive Christian run power house – the Industrial-Banking-Military Complex of America - sort of explains why the MDC behaved as it did and why Chamisa continuing so boldly.

“It is still unclear if secularisation causes wealth or the other way around.”[xiv]
[i] “Follow justice and justice alone, so that you may live and possess the land the Lord your God is giving you.” Thoughts on the Constitutional Court of Zimbabwe on the 22nd August 2018”
[ii] ‘Nine billion names of God’ by Sir Arthur C Clarke
[iii]http://www.philvaz.com/apologetics/a106.htm
[iv] A good choice to direct requests to is Sathya Sai Baba – dies 2011. Previously 2 million pitched for his birthday. No other god achieved that and he “purportedly performed all of the miracles that Christ did and then some”… http://a-atheistinthecloset.blogspot.com/2011/04/sathya-sai-baba.html
[v] https://www.ncbi.nlm.nih.gov/books/NBK2292/
[vi] https://www.youtube.com/watch?v=TvOlvwiVmYY&t=1s
[vii] Coltart’s standard e-mail closure
[viii] Chamisa's political demise: the best thing to happen to us women! … bulawayo24.com/opinion/columnist
[ix] Post-election a number of senior supporters conceded that was indeed the case and see http://nehandaradio.com/2018/08/04/eddie-cross-the-harsh-reality/
[x] Do these still stand?
[xi] https://bulawayo24.com/opinion/columnist, and call for results acceptance - see https://bulawayo24.com/opinion/columnist/
[xii] https://www.washingtonpost.com/news/democracy-post/wp/2018/08/22/the-united-states-should-push-for-a-genuine-democratic-transition-in-zimbabwe/
[xiii]https://www.rockefellerfoundation.org/our-work/grants/council-on-foreign-relations/
Location
[xiv] Read more at: https://phys.org/news/2018-07-secular-countries-future-economic-growth.