It was in the good old days of 1975, a time when the world population was a mere 4.071 billion souls and I was a happy purpose filled member of the Rhodesian elite, that I was first made aware of the productivity myth. It was a totally unschooled black dude sitting at my feet who explained the dreadful disease.

‘And what a beautiful day it is here in Africa, at the famous Victoria Falls,’ I offered. ‘But to the point. You carve pictures on elephant tusks?’

‘Do I carve tusks! Sir! Our honourable white hunters bring me ivory from all over ... I am snowed under chips.’

He was the man I sought. Not long before I had had to cull an elephant, and her tusks were in need of beautifying.

‘Why is that odd ball looking at me like that!?’ I shouted suddenly. ‘Ghaw, wena! Look away or I kick your face in.’

The offending creature was another black dude sitting in the dust on the other side of me, also busy at a tusk with chisel, but this one had a vacant stare and a lolling tongue.

‘Sir, oh sir, he is but my idiot relative,’ said my man the carver. ‘He is a good boy. Don’t worry about him.’

I looked at this simpleton. I looked at his work and the pile waiting next to him. He was getting the job done, but he wasn’t exactly the best of them.

‘Ha! You are the fool, not him!’ I exclaimed. ‘If you are so busy with orders, get rid of him, get another carver. Raise your productivity, lower your costs.’

My man nodded appreciatively. ‘But, my big sir, what would he do then? He likes to carve. At home he is more of a nuisance. Better to have him here, where he is useful, than at home where he must be looked after. This is his place.’

I left with a tiny thorn in my side suggesting I ponder something. Not knowing what it was I swiped it away. We Rhodesians back then had an empire to run, things to do, see.

As I suggested to that man 40 years ago, the reason for these job cuts is crystal clear. Lowered production costs equals higher profits - the goal of any self-respecting business owner. It is the sacred mantra by which modern business is done.

The same trend can be seen in those surrounding the big boss. Pay for directors at Standard & Poor’s 500 Index companies rose to a record average of $251,000 last year.[viii] That’s for an average of 250 hours per year, while all of America is fighting (and losing) the battle for a $15 minimum wage.

'But business is up, productivity is up, they are earning their extra big slice!' you might say. Well, not quite.

It’s true that more first world lower middle class folk are employed than ever, but their cost to business is lower than ever before too. Middle class salaries have stagnated over the last 30 years. Salaries on the ground are decreasing, salaries in the sky are rising. It’s the seed of a dark drama, a thriller, horror and apocalypse film rolled into one.

Again, the reason for the rift is crystal clear, if you’re able to break from work for long enough to think it through. To be able to justify massive salaries at the top and small at the bottom, big business operates on the following principle:
Anyone not sitting pretty in the top levels of management is affected.

Why do people of the world accept giant companies like HSBC and Shell shedding excess souls (both organisations that have already hurt us collectively in terms of drug money laundering and awful pollution)? Because of one idea, the one that says ‘this is the way it works’.
This is the fragile hope, the belief seeded in an education that doesn’t reveal the bigger picture. I hope, says you and me, us average Joes and Joelenes, that one day, if I need it, there’ll be a place for me at Shell or HSBC or some other employer, so that I  don’t end up falling through the cracks.
In this beautiful and outmoded system of ours, where does one fall to? What is the bottom? And can one recover?
Statistics in the most advanced economies show massive increases in poverty. In Canada only the richest have increased their share of national income. In the US 22 percent of American children were living in poverty in 2013. In the UK the NPI reports ‘the next (new) government … will be dealing with worsening, deepening poverty’[ix] while back in 2012 the top 1% had an average income of £259,917.[x] Globally, the number of people living in poverty is growing at a faster rate than the world's population, and the number of super wealthy is growing too.[xi]
It all makes sense, doesn’t it? In order to increase productivity and increase profit, big business the world over (and that includes governments in today’s arena, have a look at the Trans Pacific Partnership for some insight there) are cutting the meat from the bottom to feed the top. Because where do profits go? Not down to the street. Big profits get funnelled into private luxury, where it swirls in a new, sealed off economy accessed only by the few.
Today big business is spiting the many to look after the few. An interesting strategy, baring in mind that we all inhabit a single, shared planet. Leaving people to fend for themselves, effectively excluding them from participation in society’s dynamics, is a liability. It’s short term profit for long term loss. We’re shooting ourselves in the foot, or is it the head?

‘Why,’ that carver of 40 years ago would be asking, ‘don’t they see that someone has to look after the man cut from his post, once he can’t look after himself?’
This is the productivity myth. To cut production costs does not mean to maximise profit, it means to maximise division and hardship, to create tension in a society that in reality cannot be subdivided.
Next time you read the headlines trumpeting so and so has cut so much, is boasting a higher share price as the result, remember: Productivity improvement is really about devaluing those who do the real work at the production station, not streamlining business. It’s a denial of humanity, an attack on it.
It is because we hold on to and promote the productivity myth that the divide between us yawn wider. Even though CEOs live behind high walls it's still the same neighbourhood. If a flood's coming it will wipe any wall away. A climax is coming, it has to, whatever and wherever it may be. 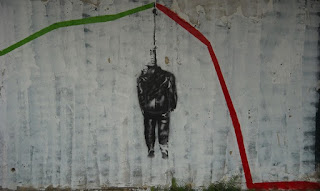