The Year of the Monkey

This Chinese New Year 300 million men, women and children caught a train home to be with Mom and Dad. Even more will take to the highways and a few million will fly. Brothers, sisters, nephews, nieces, grandchildren and (if health has been good) great grandchildren have patiently made their way home to the village to arrive on New Year’s Eve. There is a bond in that patience – they’re all in the same boat, rich and poor.

As many as can come a week or days before to give the home a thorough cleaning. On New Year’s Day the arrival of Spring and the renewal of the earth’s cycle is celebrated. The sweep out and shine up gets rid of the bad luck of the past. In this way the soul of the family, the home, is ready to receive everybody. For some, those born in the preceding year, this will be the first time they are received.

The older Mom and Dad are the more cooked food the children bring with them. All is added to the family dinner, ensuring that the day after (at least) needs no cooking fire. This practice recognises that the time when the parents were all is over. Now that the children are the heads of their own units the human Spring has come too.

Fireworks play a big role. The noise and colour showers drive out the devil, making room for goodness. The Dragon Parade with its many participants is symbolic of unity. According to Chinese mythology, strength and tenacity are bestowed on participants by those ancient beasts. In the same way the incredibly athletic Lion Dance reminds and inspires all to be fierce, powerful and agile enough to battle the bad spirits. For that community service the Lion is pleased to receive small gifts, on behalf of the natural world is the way I’ve interpreted it. In Malaysia, for example, Mandarin oranges are given. Businesses will book Lion Dance troupes to drive away the bad spirits and on the side they’ll also admit their pride in being able to entertain their customers and give work to the young folk who put in so much training.

The giving of these simple gifts is a privilege, a signifier of happiness at being able. I was honoured with a ‘thank you for being a good friend’ two oranges and a small bag of groundnuts. Forget the money value. What I held in my hand was a hope for me to have wealth in its fullest sense: health for me and my family, happiness and work success.

The elderly, the retired, the young and those without work get from uncles and aunts a Hang Pao. In giving the giver is telling the family ‘we’re ok, look we can participate’, while at the same time recognising and accepting the person to whom the ‘packet’ is given as part of the family. The packet is a red envelope, a small gift, a token of love. The envelope is red because Nian, the beast that stole the community’s last store of food, was crushed by its mighty brightness.
A Hang Pao shouldn’t be worth more than just a few dollars.

Each Chinese Year is based on the heavenly Lunar calendar[i]. As they pass so the animals of the field mirrored in the stars become totems; the rat, ox, tiger, rabbit, dragon, snake, horse, sheep, monkey, rooster, dog and pig. In this, and the myths, I’ve come to see that the culture (broadly, there are over 170 dialects) cannot be understood unless the language is mastered.

Words, sounds and written combinations conjure image upon image, all endowed with subtly different meanings. My gift was of groundnuts which represent earthly fertility but is a wish for healthy family and a good career. To have given me peanuts wouldn’t convey the same, not because the nut is different but the sound, word and pen stroke create a different picture. My friend Tan has tried to show me how a pineapple means gold but I haven’t a versatile enough imagination.

There is nothing religious about Chinese New Year. ‘It is a cultural celebration that archeologists date back to the Shang Dynasty, 14th century B.C.’ says history student Winston Chan. ‘The modern family who sit down to New Year’s dinner are a mix of Taoists, Confucianists, of all the Christian off-shoots, Muslims and of course a majority of Buddhists. Buddhism isn’t a religion; it is a way of life and it is there naturally in all home-grown Chinese, no matter what religion they adopt later.’

Times are changing. The long journeys back acknowledge Asia’s rapid industrialisation. Families are city bound, and more and more don’t know the country at all. Where the streets of Kuala Lumpur were deserted just a short 20 years ago as folk took off to get back to the distant village, now more and more Moms and Dads are born and bred in town. This phenomenon is happening all over - China itself, Thailand, Vietnam, Cambodia. Reunions of the future will be somewhere in the suburbs of the industrialised world; they won’t be at the original ‘Home Place’.

As commercialisation has arrived and the celebration has become part of the economic cycle, as some uncles make it big and few work the land anymore, so the presents have grown bigger. In these cases the packets are no longer a recognition of simple family unity and love, they’re a statement of identity, they’re something else, monetised.

Chinese New Year has always been about family, it was the one time in the olden days when nature told the farmer stop, rest, take stock and celebrate loved ones for I will see to it that the new growth happens.

‘Good luck for this Monkey year’ says the most popular and essential 2016 New Year greeting. Indeed. A Happy New Year to all. 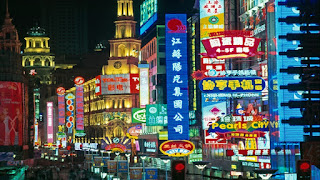 [i] ‘The festival falls on the first day of the first month in the Chinese lunisolar calendar, pin pointing both the moon phase and the time of the solar year. The Western (Christian) New Year which is based on a solar calendar. A lunar month is around 2 days shorter than a solar month and in order for the lunisolar calendar to catch up, an extra month is inserted every couple of years.’ – Winston, school essay.
at 1:49 AM