President Trump will address the global elites at the World Economic Forum in Davos, Switzerland, later this month. A self-proclaimed and system enabled self-made CEO, he’d command a personal invite anyway. He may notice South Africa’s corporate-made billionaire (and president awaiting election) Ramaphosa there too.
What the elite represent there has become for most the new aspiration, setting how we live and behave each day. Those who don’t follow their doctrine, who perhaps see a need for more equal societies with flatter hierarchies and fewer angry, hungry and unproductive hordes beating at affluent gates, don’t belong.

About 40 years ago Margaret Thatcher famously declared “there is no such thing as society”, only individuals in competition. Thatcher was an early Davos employee. She helped push the new truth.

One year into the Trump era and world economic health has never been better - the Dow racing through 25,000 proves that.

Forget about the job losses, the widening private citizen debt, the dumbing down at the universities, millions on the move seeking refuge and, particular to South Africa, the continuing high levels of poverty and personal violence - all who are worthy have had an amazing 2017.

Prospects are even better as the full world-market benefits of the Trump tax-breaks are still to add compound paper growth. “Message to the population at large” wrote Michael J. Brenner on January 4, 2018, “we must admire the top 1%. Our ‘fault’ is not belonging to them.”[i]

Trump is merely a figurehead – under Clinton the trend would have been the same. Even a cardboard cutout of an “illegal” “Hispanic American” with 40 years residency and hard labour as president would make little difference.

The pushing of weapons sales predates the Trump administration. "Buy American" isn’t new policy but merely new packaging. With or without the Republicans and Democrats weapons sales would still surge[ii] and the profits would still drive the indices higher, adding to CEO pay, improving banker bonuses and lubricating golden handshakes for those ‘caught-out’ doing their job of maximising profits. The Nasdaq would still have punched out 7000.

At Davos they will speak about a vast expanding and vitally important Middle Class - vital because it’s from there that the new wave of intelligent middle level managers, producers and advancers will come. And the Middle Class consumes, and consumption is the bedrock of profits.

Pew Research[iii] defines middle-income households as those making between two-thirds and twice the national median household income, which means as income stagnates or net worth comes down so too standards of living, but not class definition. Not mentioned is the enormous debt burden the Middle Classes of the West have been encouraged to take on … in order to work more! Such luxuries like overpriced homes, transport to get to work, education to land a job and health insurance to make it each day.

Hundreds of millions of Chinese and other South Asians and Russians have made enormous sacrifices to claw their way into the Middle Class, but it hasn’t come because of the Davos showcased system – rather in spite of it. And, estimates the Brookings Institution, the European and American middle classes (i.e. of the West) are shrinking.[iv]

The World Economic Forum, better known as Davos, is a league of corporate giants.[v] The 1st gathering was in 1971. The same year the Nixon administration ended the US dollar’s convertibility to gold, meaning, in practice, that as the USD was the world’s default currency, all international trades had to be priced in and pass through the USD system. Before the 70s were over, Reagan and Thatcher added emphasis by destroying government for the people and advocating instead the CEO as the man in charge.

By its 25th anniversary the Forum had resolved that in the new vision of life nations as viable leaders/economic entities were done, that capitalists (the moneyed elite) hand over to managers, and that the companies they control lead society. Privatisation was the new new. The politician who served the Corporacy was electable.

In this vein the rationale behind NAFTA and the various secret Trans-trade agreements (Trans-Pacific Partnership (TPP), Transatlantic Trade and Investment Partnership (TTIP) etc.) dictates nations hand over leadership to business.

Adherence to globalisation, free trade, floating currencies, private banks and the absolution from liability for negligence for companies is the Davos path to salvation. Assistance to stay on that path comes from the pivotal Central Banks as well as business owned rating agencies (Moody’s et al) and rescue units like the World Bank and the International Monetary Fund, through their structured ‘bankrupt-you’ packages.

There is no identifiable leader, no body to take responsibility, only the all-consuming objective of maximising profits.

The King of Davos is a concept (writes John Ralston Saul) through which society is controlled by the economics of the world’s Uppermost Echelon. The (professionally trained) managers of the big companies and banks are the Knights and the elected officials of all invited countries the powerless, kowtowing, and if they (Ramaphosa, Gordhan et al from RSA) could only understand it, humiliated princes in fancy dress.

As much as the Corporacy gives the appearance of being in competition, that state is overridden by the condition that they are inseparably bound by the duty to make maximum profit for its shareholders, no matter the cost to humanity or the environment.

If a company fails or heads for bankruptcy, so be it – it has failed the system, given up its right to membership. If it is caught bending the rules, the question whether the transgressions were in reasonable pursuit of profit is the one to be answered - not what damage was done. Maximum profit is, as Canadian academic Joel Bakan despairingly points out, a legal requirement of all legal business units.[vi]

The shark, often described as the ultimate machine, is what every capitalist company aspires to become. Staff compensation, numbers and (increasingly with AI advancement) duties and workloads are dictated by cost, cost measured against dividends to shareholders and not to the wider society or the nation.

Likewise participation in the community, or for example, waste disposal, are measured in terms of the profit line - there has to be an accumulating benefit to the business unit. If the river is polluted and people get sick, build a profitable clinic or give out pills, pills which have to be bought expensive once they’re understood to be needed.

Charity begins at home. Home for the Davos man and woman is the Board Room and the address to which the dividend cheque is to be mailed is his/her bank. No member of Corporacy will give or change or advocate anything for free. The dismantling of the slave trade was a business decision and so too the process of de-colonisation of Africa.

A just-like-you-and-me dude retired businessman Robert Monks realised late in life that “the corporation is an externalising machine”.[vii] It pushes on to the accepting/uncaring public every cost it can. The corporate machine “doesn’t take into account the concerns of flesh-and-blood human people,” or of their world, but feeds on that flesh and blood and the world they inhabit.

Take Back The Rand

At Davos, stories of the grand-good the corporates have done will dominate, as will near film-star level stories of the participants’ activities/attributes. But the more truthful truth will only come out if scrutinised for basic logic, reason and plausibility. I guess it takes the experience of having been around for some 70 years to recognise that the capitalism we have now is not the capitalism of the 1950s and 60s. It was softer then, more equal, and there was a greater chance of drawing everyone – each to his/her own level for we’re not all equal – in and of making them participating consumers, lovers of leisure and able to pay for it.

Many don’t seem to see the link between climate change and environmental disasters (and elephant deaths) because they’ve grown up – evolved with - the advent of the Corporacy. Tolerating company errors and queues and price increases and thefts are fine. Just don’t ask anyone to queue at a government passport, post or municipal payment office!

Genes are passed from one generation “enabling” the next.  Memes – rumours, mass media distortions, advertising nonsense, and so on – are the genes of the manipulated word run by the machines of the World Economic Forum. Their domination is such that they are passed on from one human mind to the next in a split second, every split second.

The folk who run these machines and the ever-changing shareholder bodies will be showing off in Switzerland at Davos. Mostly they’re ‘nice’ people. Like the Germans who directed, organised and ran the WWII death camps they do their jobs effectively and efficiently during duty times (otherwise no pay or bonus or capital gain/dividend) and when off duty bounce their kids on their knees and play tennis with you and me. Our politicians are their lackeys.
Because of our capacity to want to believe, along with our (collective) inability to analyse the root of our disappearing lives, we’re happy.

If those of us who live in Southern Africa want to regain a measure of control we need to start by taking back the Rand. Will Anglo-American’s Ramaphosa save it? No – it’s likely to be over R14 to the dollar come December.[viii] Why? Well we’re already down the road to privitising water. 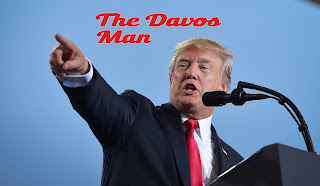 [i] He was bashing us sheep and the NYT (https://www.theglobalist.com/united-states-tax-reform-inequality-society-media) and it fitted my line so easily.
[ii] http://www.straitstimes.com/world/united-states/us-set-to-boost-arms-exports ...
[iii] Pew Research Center ... www.pewresearch.org … A nonpartisan fact tank that informs the public about the issues, attitudes and trends shaping America and the world.
[iv] “Brookings Institution scholar Homi Kharas estimates that the European and American middle classes will shrink from 50 percent of the total to just 22 percent” reports https://www.reuters.com/middle-class-infographic and see https://www.weforum.org/agenda/2017/01/5-charts-which-show-what-is-happening-to-the-middle-class-around-the-world/ … “Poor employment prospects and low-income growth in many developed economies have laid the groundwork for the rise of populism. Did policy-makers ignore these trends or do too little to redress them? What can be done to restore growth in the middle class and confidence in the future?”
[v] I have drawn on information from Susan George and J.R. Saul.
[vi] The corporation – the pathological pursuit of profit and power.
[vii] Quoted by Joel Bakan
[viii] “Sonja Keller, senior economist at J.P Morgan said that the firm’s base macroeconomic projections see the rand at R14.50 to the dollar – regardless of who won the December election.” https://businesstech.co.za/news/finance/217991/heres-what-the-rand-could-be-worth-at-the-end-of-2018/
at 6:57 AM