Banks stand aside … do your job ANC … declare war on Poverty 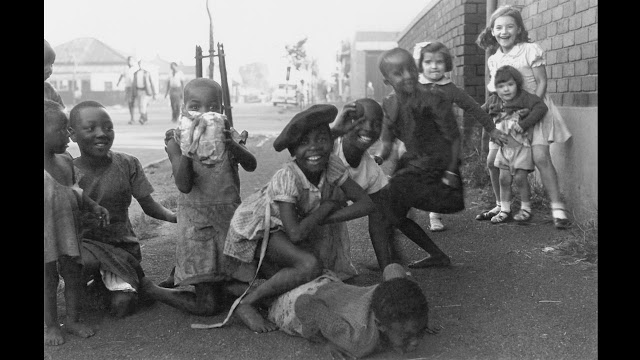 When my dad was a boy walking barefoot, without a jersey to school during mid-winter on the Rand[1] people said “poverty doesn’t need an explanation, wealth does.”[i]

Greed Capitalism ensures profits flow upwards and are deposited into accounts and stocks and shares. That’s where the banks are. Money is being withdrawn from making performance contracts in society.

And banks have another nation-killer practice: they are exploiting those citizens who are least able to afford Greed banking services.

Private debt in RSA, courtesy of the conventional system

“South Africans are the world’s most avid borrowers” reported The Economist this January. 86% had borrowed money and 25million out of about 37million owe money to financial institutions or other corporate lenders ... (yet) … “fewer than 10m people are formally employed”.

WOW! That’s trouble. And what has the country to show for it?

One of the highest crime rates in the world[iii], a massive climate-change footprint[iv] overdraft[v] and we hold the “most unequal of all nations” trophy.

At the irritation level roads are terrible, drivers worse, best food is exported, schools are (overall) dumbing down institutions, health is mess (literally last week), and Tshabalala who earns around R50 million had to bring in a government man to help him.

The idea that only bankers, owners and managers of the Greed machine and their selected-protected top politicians, business and sports people and artists deserve the best of life is wrong - totally. They are, after all, winners-of-a-life-of-excess only because they conform to the requirements of Western economics.

Even the most disadvantaged of the masses must have a chance to flourish, to say to their children, “I lived. And I’ve given you a better chance”.

Family expenditure has to be strictly balanced with income otherwise the debt collectors will come knocking. Until we find a better a system Capitalism dictates people live according to what their skills and the labour-market allows them to earn.

Are South African companies investing in South Africa? So many have left President Ramaphosa’s gimmick was to invite foreign-others to plug the gap! Worse, we’re exporting under unfavourable terms while at the same time accepting dumped products (Obama’s chickens) and borrowing expensive foreign currency.

The more street-level economic conditions[vi]  deteriorate the higher/more immediate the profits sought and the faster money moves out. That translates into minimal local investment.

That’s why people are forced to the banks. Loans temporarily stimulate the market but it isn’t investment. Its debt.

Debt PLUS the (uncreated) interest has to be paid back which reduces the wealth pie available to the not-rich by taking vital cash out of society. Worse, few of the bottom 60% of South Africans can borrow formally: not only are their extended families exhausted supporting them but their capacity to be consumers is diminished … so businesses go into decline.

The impotency of the majority who cannot get work or can only get part-time work, who haven’t the money to start a small business, translates into anger directed at those with money, with skills. The skilled continue to leave, business and banks neglect reinvestment and the cycle repeats.

Running a country is NOT the same as running a home

South Africa isn’t a super large home that needs balanced books. It is a nation of (around) 56 million with very different but totally integrated sets of vital needs of food, health and education. And all have desires like wanting time and energy to dance, sing a little. We need to be alive enough to discard the emotion-blocking Rhino-hide we’ve developed that allows us to dismiss the rapes, murders, child abuse, school closures, bankruptcies and municipalities collapsing because residents can’t pay. We have to move beyond posting pictures of pothole pools, getting incensed over a poached elephant or a talk on colonialism. We need to be able to cry a little.

What exactly will happen when the electricity (or water) for a range of communities is shut off because of non-payment?  Or the bulldozers arrive mid-winter, your brother is declared bankrupt?
The likely shout is “tough - that’s their problem”.

But it isn’t – unless your poor neighbour is assisted you will be brought to his/her level and suddenly most of South Africans will be wondering how to survive the next month either because they’ve joined the debtors or waiting for the robbers.

And that assistance has to be long-term, as long as it takes to raise a child.

The government of the people of South Africa has a duty to ensure that happens.

A Capitalist solution is available

Everyone has one common requirement to get on with life in a Capitalist climate: The exchange of money.

To fulfil even the most basic life functions money is the “contract” that makes “it” happen.

That cabbage will only end up in a family pot if money moves. Wages will only be paid if a job is created and the work performed.[2]

Project growth is the foundation to ensure the exchange of money happens.

Projects owned by groups, communities and regions – projects where the thousands of small are treated as important as the handful of large. Projects … productive works … that’s what we need - not borrowing to buy weapons from the overseas governments who lent the money!

It is about common sense and good governance

If a community needs a road, a veg-plot, a clinic, a waste dump sorted – whatever can be motivated as being beneficial to that group or community - MAKE IT HAPPEN.

Permission from the CEOs who collect annually at Davos[vii] isn’t required.  Only common sense and the courage to tell them to take a jump.

Banks and businesses look to maximising profits for the few.

Society must look to reversing losses, costs and trauma.

That happens by involving the whole nation. In doing so local people will have work, they will begin to become independent which brings feelings of belonging. They’ll love the opportunity, they’re keen, needing only guidance and cash injection.

There are thousands upon thousands of jobs/projects that must be done now and thousands more which once initiated will stimulate FURTHER growth - growth in the traditional capitalism way, and they’ll bring in more taxes.

The re-birth of South Africa is limited only by imagination. And lack of expert guidance.

1.       Projects must be owned; responsibility and congratulations attached for performance.

2.       Budget (becomes money) is only allocated to productive/enhancing projects.

4.       At the end of their term the nation’s presidents and provincial premiers will be sentenced to live in the poorest community in the country.

The Greed Capitalism rule … “the maximisation of profits no matter the cost to humanity or the environment” is cancelled. If a project pays wages into a community and otherwise comes out even that’s grand, amazing. If a job that was done by one graduate is split and done by five – wonderful.[viii] They’ve a wage and graduate will instruct elsewhere. That’s real productivity improvement.
So much is obvious yet so little done.

It is about changing our thinking

If South Africa found itself in a war it may win (with say Malawi) parliament wouldn’t delay matters by directing its generals to approach ABSA Bank for a loan.

The deaths and knock-on effects of poverty are far more serious and yet a declaration of war and implementation of war-winning-thinking that WILL turn South Africa around hasn’t happened. Parliament has failed to protect its electorate.

The consortium of private banks must continue though capitalism should be about competition. If borrowers prefer to pledge assets (a house or car say, or a stop order against future income) to get a loan that’s fine, but now government will be in the national market and it will accept certified projects as assets.

The immediate benefit will be families having a better go at balancing their books. National profits will be slightly delayed – even the biggest of businesses allow a time horizon on monies invested to produce, to mature.

There is no better investment than one made in oneself and today is the day the ANC must press the button on the computer...

The most often quoted example is the American government’s investment in General Motors, an act that put food on the table of the homes of one million workers.[ix]

The South African Iron and Steel Industrial Corporation (Iscor) was just a project in 1928. As close to home but much smaller, of the scope easily handled by district administrations, is the example of Southern Rhodesia. It avoided the worst of the Great Depression (1920s) when the brand-new government sponsored a host of new works. Among other projects the road to Plumtree was modernised, police stations built and white schools expanded.

Small and neat … and so are our communities when we start to see the people and not just numbers in a register and roads on a map.

A project is far superior to a dead asset lodged in a bank. There’ll be work for all skills, there’ll be results - money will move from mother-homemaker to butcher to baker to veg-wholesaler, beer brewer to son’s teacher - energising the community.  Magistrates won’t be sentencing Mums for stealing bread.


[1] Greater Johannesburg
[2] Anybody who advocates cutting government developmental spending is either brain-washed into the ideology of US/EU economic hegemony or doesn’t understand classic economics – there is a word for both … idiot.