Shit On Rhodes, But Remember

Auschwitz, the biggest of all of the death camps of the Nazi period, wasn’t torn down or defaced. The Poles preserved it as a museum, a tangible reminder to the world of what happened with the message attached: never again.

That Rhodes’ actions drove a wedge between English and Afrikaner and Bantu and Coloured and Indian and ‘Others’ throughout Zimbabwe and South Africa is beyond dispute. There is no word other than stole for what he did to the people between the Limpopo and the Zambezi. He helped light the fuse of the war that nearly obliterated the Boers and his De Beers monopoly is the prototype of worldwide corporate action today.

However, that he alone hammered the stake through the living hearts of all of the peoples of Southern Africa is wrong. Just as he was programmed by Europe’s enlightened thought of the day to seek out profit as he killed, banished, bashed and stole to enlarge the British Empire in Africa, so men came after him.

The felony that was to become the Apartheid constitution of the Union of South Africa wasn’t of Rhodes’ making, nor was it bad Queen Victoria and Lord Salisbury who led him on. Lord Milner and his Milner’s School of men, Louis Botha and Jan C Smuts were responsible. It was Smuts, led by the British, who handed over to Dominee Malan the House of Apartheid ready for finer decoration.That Hitler was allowed to become the bully he was in the vain hope he would wipe communism (capitalism’s only opposition) off the face of the earth isn’t remembered. That Russia and her 20 million plus dead saved the world from the Nazis has been forgotten.

Nothing will be achieved by pulling down the statutes of Victoria, Smuts and Rhodes or by re-naming Rhodes University and etcetera and etcetera. How about a new legend on the base of the Rhodes statue? Let us try:

“Cecil John Rhodes: Conqueror.
Don’t be like me,
Be as I pretended to be.”

For all the good the re-phrasing of history does it seems the central message we shouldn’t do it again is forgotten; repeats are more common than the original.

Perhaps what we need in South Africa and in Zimbabwe is more aide memoires. Let’s tourist-ise our villains; Smuts, Queen Vicky, Rhodes, Botha. Let’s have T-shirts, miniature statues and bumper stickers with their faces and the legend, ‘never again.’ Let’s have collection boxes at our memorials and let’s add our modern anti-heros too: Mbeki with his HIV and arms deal credentials, Zuma and his wallet and docket that grows daily while the poor continue to suffer. Let’s collect that money and do something useful with it, schools have my vote.

History repeats itself, meaning history is now. Little has changed in principle, the mighty continue to profit. Let’s remember, let’s learn from the past not erase it, let’s apply the past to the present instead of pretending that what happened then is not or will not happen now. 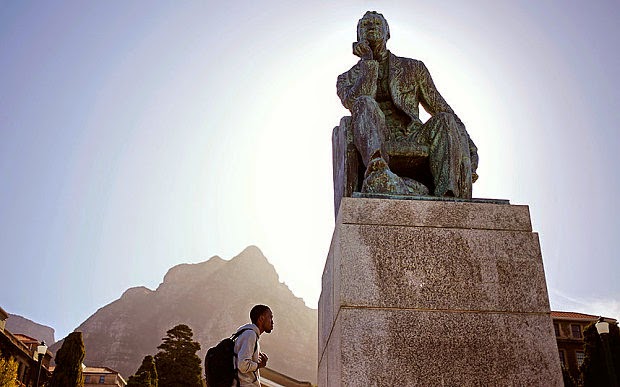